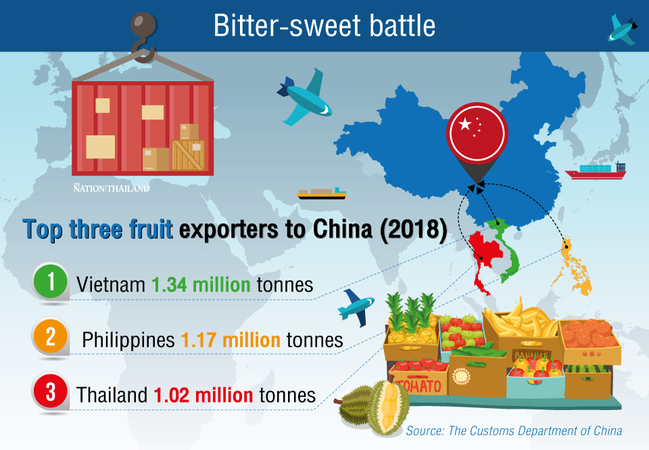 Thailand, Malaysia, Vietnam and Philippines are competing fiercely for a larger share of China's fruit market.

China imported fruits worth US$7.62 billion, up 36 per cent from the previous year, according to statistics from the Customs Department of China in 2018.

The director-general of the Department of Trade Negotiations at the Commerce Ministry, Auramon Supthaweethum, said there were many factors that led to intense competition among Asean countries to export fruit to China such as the Asean-China Free Trade Area (FTA), and Chinese tourists’ love of Thai fruits. Also, the ongoing trade war between the United States and China has led to China imposing a 30 per cent tariff on fruit from the United States, resulting in China importing more fruit from Asean.

Currently China allows Malaysia to export 10 kinds of fruit, including longan, mangosteen, lychee, coconut, watermelon, durian and pear, which will be effective from October 12. Malaysia is also negotiating with China for export of jackfruit. China has allowed Vietnam to export nine kinds of fruit such dragon fruit, watermelon, lychee, longan, mango, banana, rambutan, pineapple and mangosteen, effective from August 27.

The data of the Commerce Ministry as well as that of the Customs Department showed that Thailand exported chilled, frozen and dried fruit worldwide worth Bt 85.1 billion, a 11-per-cent year-on-year growth, and China is Thailand’s largest export market. The top five fruit exports by Thailand were durian, mangosteen, longan, banana and pineapple.